69 years ago the city of Agrigento decided that the “primavera agrigentina”, as locals call the enchanting event of the almond trees starting to blossom during February, anticipating the arrival of spring, was such a fascinating event that it had to be properly celebrated: this is how the first Blossom Almond Tree Festival in Agrigento was born. Just a couple of weeks left from the beginning of the 69th edition starting on February 8th: let’s see why you can’t miss it (especially if you’re staying in one of our Sciacca villa rentals: just an hour away!) . 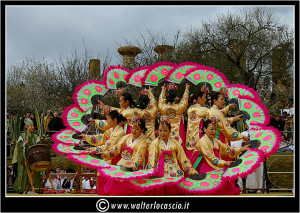 Folk group performing in front of the Temple of Hercules, Valley of the Temples, during the Blossom Almond Tree Festival in Agrigento

Every year, the UNESCO World Heritage site of the Valley of the Temples with its invaluable, awe-inspiring monuments, wearing its flowering cloak, is the marvellous setting of a lively and heartfelt celebration that will start in the very heart of the Valley, right in front of the majestic Temple of Concordia. The “Friendship torch” is inflamed and the Blossom almond tree Festival starts, together with the 59th Folklore International Festival: plenty of great folk groups from all over the world will be performing their dances and show right on the streets of the city of Agrigento as well as within the Valley of the Temples, trying to win the “Golden Temple” trophy. Torchlight processions, folk music and dances, entertainment for kids, street artists and parades: the city and the Valley will become the vibrant and animated centre of the island for more than a month, until March 16th, when the celebration will end with all the folk groups performing within the Valley.

The Blossom Almond Tree Festival also houses the “Children of the World” international Festival and plenty of other side events and celebrations: here are the most interesting ones – those you really should not miss. Luckily, the Festival will be on for more than a month – plenty of chances for you to come by!

Saturday Feb. 8th, an ethnic-music concert will start the celebrations at Pirandello theatre, while the next day the opening ceremony will take place in front of the Temple of Concordia, within the Valley: folk groups from all over the world will be performing in the most enchanting setting. If you happen to be around on Valentine’s Day, you’ll have the chance to listen to the most famous and traditional Sicilian love songs at 5:30pm at the “Ex collegio dei Frati Filippini”, and if you’re coming by with kids you’ll be happy to know that archaeology activities are scheduled for children and families within the Valley on February 23rd.

The first “Cake design” contest is also going to be carried out during the Festival: on Saturday, March 1st, we highly recommend you take a walk along Via Etnea – shop windows will be overwhelmed with beautifully hand-crafted cakes, all realised by local bakers as well as amateurs. Yummy!

The Almond Tree Blossom Festival in Agrigento also hosts the “Children of the World” International Festival, which will start on Thursday, March 6th: don’t miss the children parade on March 7th, from Piazza Pirandello to Piazza Cavour! Thrilling, exciting performances from the Folk groups will follow. The “Children of the World” Festival also includes the “Peace parade” from the Temple of Giunone to the Temple of Concordia at 10am on March the 8th, as well as two additional International Groups’ shows at 3:30pm and 8:30pm at Pirandello Theatre.

Parades, painting workshops, folk groups’ performances, torchlight parades and other thrilling events are scheduled from March 9th to March 16th as well, every day, one after another: you’ll just have to choose the day and time that suit you best.The last day, however, is a must-see indeed. At 9am on Sunday March 16th, a huge parade will go from Piazza Pirandello to Esseneto stadium: international and local folk groups will be joined by “carretti siciliani”. The final show will be set in front of the Temple of Concord at 2pm: the award ceremony is always exciting and fascinating, but we highly recommend you get there early – it’s going to be quite crowded!

Acireale Carnival 2014: ready to be amazed?