Since the dawn of time Sicily has been well known for its fertile soil and mild weather providing the perfect ground for growing an astonishingly wide range of products, from spices to fruits and vegetables, including crops and grains. And not only the variety of products is ample and wide, but it is also full of excellent and tasteful delicacies, from olives to wine. So let’s see the most delicious ones: they are all part of the varied and flavoursome traditional cuisine of the island, so you won’t have any trouble tasting them all during your holiday!

Olive groves in the Hyblaean Mountains (image via wikipedia)

1. Olives: olive trees were probably brought to Sicily by the ancient Greeks. The climate of the island is perfect for their growth: olive groves can be found almost everywhere in Sicily, from the hills of the Hyblaean Mountains to the tiny island of Pantelleria. We recommend you taste some olives from Castelvetrano: you’ll find them in local markets, both seasoned with oil, chili pepper, salt and oregano or just with oil.

2. Capers: among the most well-known aromatic plants of Sicily, capers are widely used in local cuisine as a seasoning for appetizers (such as the renowned Caponata di Melanzane), pasta-based courses and fish. Try and look for the capers from Pantelleria, definitely the most delicious ones: local markets sell salted and pickled Pantelleria capers that you can take back home with you.

3. Spices: Sicily is a land of scents and flavours, you’ll know it as soon as you reach the island. Spices and aromatic plants and herbs grow all over its shores and countryside, and are a key element of the local cooking tradition. Laurus is used to flavour fish and meat, saffron is what gives world-famous arancine their peculiar taste, basil is used to make delicious pesto with almonds (Trapanese pesto), wild fennel is the unmistakable protagonist of the unique flavour of “pasta con le sarde” and of “sarde a beccafico” (two of the most famous recipes of the island), and Sicily is the main producer of oregano in Italy.

4. Pistachios: the “green gold of Sicily”, that’s what locals use to call pistachio nuts. The island is one of the biggest producers in the world, and the city of Bronte (located within the Park of Etna) is the capital of pistachios indeed. Most commonly found as a flavour for gelato or granita, pistachios are also used as seasoning for pasta (“pesto di pistacchi“) or for fish, and local sweet pistachio cream is an absolute delight. 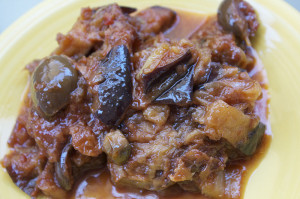 5. Eggplants: probably the most well-known and appreciated vegetable of the island, “Milinciani” are the key ingredient of the famous “caponata“, one of the most delicious appetizers you’ll find in Sicily – a must-try indeed. Eggplants are cooked in any possible way, especially fried and breaded, and often used to flavour pasta or rice.

6. Almonds: together with pistachios, almonds are some of the most peculiar and unique ingredients of Sicily’s cuisine tradition. Almond groves can be found especially in the North- and South-Eastern countryside, and are broadly used for making desserts and pastry (“Frutta di Martorana” is made with almond paste), as well as the flavoursome “pesto alla Trapanese” and much more: discover this typical recipe in our article about Typical Trapani cuisine. 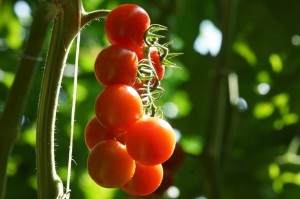 8. Cipolla di Giarratana: the typical onion from Giarratana grows only in this tiny village hidden among the Hyblaean Mountains. It’s a sweet variety of onion, as much rare as delicious, and has been listed as an Ark of Taste food and as a traditional Italian food. The production of this onion is limited, so it will be harder to find it around, but with a little research you’ll find the right restaurant to taste it!

9. Black bread from Castelvetrano: this peculiar bread is only produced in the area of Castelvetrano, in the province of Trapani, just a few minutes away from our Selinunte villas. Local “tumminia” seed corn, still grinded with stone mills, is what makes this bread so delicious, with flavours of almonds and malt: this millennial tradition is carefully preserved by a local consortium and has been listed an Ark of Taste Food.

10. Olive oil: yes, olives were the number 1 of our list, but trust us – have a taste of Sicilian olive oil on a slice of bread and you’ll understand why this product deserves a special mention. Used both for cooking and seasoning, extra-virgin olive oil is an absolute delight. All local olive oils from Sicily are protected products for their excellent quality; however, we recommend a taste of those from Mount Etna, the Hyblaean Mountains and Mazara del Vallo.

Eating in Trapani: typical recipes from couscous to almond pesto

A Sicilian menu for your Christmas lunch