As we tell you in the previous post, the preparation of fresh tomato sauce is a recurring event in summer time that engage the whole family, well the female side at least. 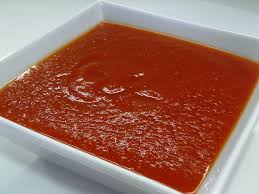 Here we reveal the traditional method that Sicilian people use to follow to prepare fresh tomato sauce, so you can learn it and do it by your own. First though you better taste the original Sicilian-style sauce, and a summer holiday in Sicily is the perfect chance to do so.

The kids have simple tasks like washing the fresh tomatoes with water. After that, some other womens cut and put the tomatoes in a cauldron, called in Sicilian dialect “quarara”. The aunts monitor the tomatoes boiling in the “quarara” over burning wood and not over gas fire, according to the tradition. Then the oldest ladies of the family put boiled tomatoes in a strainer to squeeze; this way they can squeeze the juice out and at the same time remove the peel. Then they put onion and garlic in a big pot and simmer them with extra virgin olive oil. They pour the liquid tomato into the pot, add fresh basil and let it boil for some hours, monitoring and blending it with a long wooden spoon until the liquid tomatoes turn into a creamy sauce.

Even if tomato sauce is ready, the whole procedure is not over yet, because we remind you that the final aim is to fill the “buttigghi”, i.e. preserves of tomato sauce that will last for all the winter time.
So, little children are again engaged in the preparation: they wash the glass jars or bottles where to put the sauce. Then they put them drying under the sun, because it is important to know that  – as grandmothers strongly recommend – if bottles are not perfectly dry, the sauce you put inside will become sour. After pouring tomato sauce into the bottles or jars (previously washed and dried), the oldest women of the family proceed to the last step: boiling the “buttigghi” containing tomato sauce and after that, they put them, covered with a rag, in a dark, fresh and dry room like a pantry.