Sicily is the dream of every vacationer who loves hot sandy beaches and crystal clear sea. There are hundreds of spots we could suggest you to visit, some of them are famous all over the world, others are hidden treasures, known only to the Sicilians and to a few more. That’s why this week and the following, we want to take you on a tour of the best 10 beaches in Sicily: they won’t be necessarily the most beautiful ones, but each and every one of them has a peculiar characteristic that makes it unique and surely a must-see.

If you plan to come to Sicily for your next holidays the best choice is to book one of our villas on the beach, to enjoy the most relaxing vacation you’ve ever had, wake-up to the sound of the waves, and take a dip whenever you feel like it. Our villas are near some of the most beautiful beaches of the island.

Today we start from Western Sicily and its white sand beaches.

We start from the capital and from one of the most popular beaches on the whole island. The beach of Mondello, a small borough a few minutes away from Palermo’s city centre, is a stretch of white sand almost 2 kilometers long, that outlines a small gulf on the coastline. Walking on the seaside you’ll have the chance to admire the charming Art Nouveau style villas, built here between the end of 19th century and the beginning of the 20th, along with the Antico Stabilimento Balneare, one of the landmarks of the city: a wonderful bathing house built on the sea in 1906. Walking all the way west along the seaside you’ll eventually get to Capo Gallo Nature Reserve: you’ll find no sand here, only rocks, unspoilt nature and a crystalline blue sea. 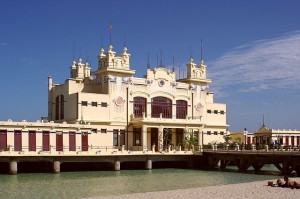 San Vito Lo Capo’s beach is one of the biggest of the island and one of the most popular as well. It’s probably the best destination for families with kids, that will surely enjoy playing on its amber thin sand. Another must-see in the area is Zingaro Nature Reserve, where, surrounded by wild nature, you’ll have the chance to go on a naturalistic hike and discover charming little bays, with a crystal clear sea.

We go on with our tour going South, passing the Westernmost point of the island, and entering the Marsala area. This region is famous for its DOC wine and for hosting one of the most peculiar nature reserves of the island, named the Stagnone: a wide lagoon that includes four islands, the most famous among them is Mozia, well known for its Phoenician ruins. Driving on the coastal road the landscape offered by the traditional saltplans is terrific; you’ll then get past the historic city of Marsala and from there, going south, you’ll finally get to Signorino beach, recently awarded with a Blue Flag thanks to the quality of its waters. Early in the morning the beach is great, but it offers its best views to the ones who visit it in the late evening.

Menfi‘s area have become a popular tourist destination just recently, anyway you won’t find here those noisy crowds of vacationers, not even in July or August. Yet the region has some of the best spots of Western Sicily: the most known is Porto Palo, with its characteristic cool water and it’s long beach. Before getting there though, you’ll find a lot of beaches on the side of the coastal road, some of them are hidden by sand dunes, like the ones part of Foce del Belice Nature Reserve: a 4 kms long coast made of sand where the salt water coming from the sea meets the Belice river.

Last but not least! Scala dei Turchi, literally “Turks’ stair”, is one of those places that leave an unforgettable mark in your memory: you’ll find two beaches here divided by a white cliff made of marl, a sedimentary rock with a characteristic white color. A view you don’t want to miss.

These are just a few suggestions, but take a look at our Sicily Travel Guide, for more hints and suggestions on touristic destinations in Sicily, and of course consult our complete catalogue of villas in Sicily. See you next week with the Top 5 beaches in Eastern Sicily!

The top 5 beaches you will find in East Sicily