If you are planning your trip to Sicily, you should know that there are four main airports on the island: Palermo Punta Raisi, Trapani Birgi, Catania Fontanarossa and the recently-open Comiso airport.

It’s not always easy to choose the right airport as there are different needs you must considerate: your favorite airline company flies to Palermo, Trapani, Comiso or Catania? Or, where does the cheapest flight land? Or, what if you are staying in one of our Marsala holiday rentals, but the only flight you can take that day lands in Catania? And more: how can you reach your destination from the airport? This post is made to clear things up and let you choose the right and most comfortable airport in Sicily for your holiday.

See also: When should you consider car rental in Sicily? and 3 tips you should follow to make the best of your holiday in Sicily 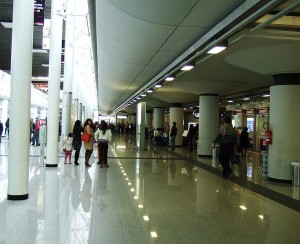 Inside the airport of Catania Fontanarossa

First of all, you should know that – even if Palermo is the capital of Sicily – the biggest airport is Catania Fontanarossa. It is actually the third biggest airport in Italy (more than 6 millions passengers in 2012) and the oldest in Sicily: it was first built in 1924. Fontanarossa has been completely renovated in 2007 and is nowadays the modernest and most welcoming airport in Sicily; the most important European airlines fly here, including low-cost leaders and flagship airlines. You should consider the Catania airport if you are going to stay in the provinces of Messina and Catania, Siracusa and Ragusa – but the new Comiso airport is probably going to fully cover the two latter destinations over the next few years.
How to reach the city centre: every 20 minutes from 5am to midnight “Alibus” leaves from the airport and takes passengers to the central station of Catania. Call 800 018696 if you need more details. From the railway station you can reach both the north-eastern and south-eastern areas of Sicily; rent-a-car companies are available both at the airport and in the city centre. 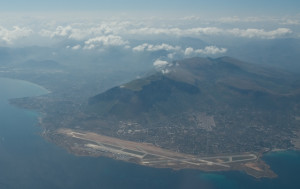 A view of the airport of Palermo by Blackm0rpheus, on Wikipedia

The airport of Palermo Punta Raisi “Falcone e Borsellino” is located 35 km far from the capital of Sicily, within the Cinisi district, and it’s the third airport in southern Italy after Napoli and Catania. First launched in 1960, the airport is nowadays undergoing a massive renovating work to make it more suitable for the wide amount of passengers travelling here (more than 4.500.000 last year). Punta Raisi offers daily connections with the most important Italian destinations as well as with a lot of European cities. We recommend this airport if you are staying in the provinces of Palermo, Trapani, Enna, Agrigento or Caltanissetta, as well as the little beautiful island of Lampedusa. Punta Raisi will also be the best solution if you’ll need to catch another flight to reach one of our Pantelleria villas.
How to reach the city centre: the Prestia e Comandè bus leaves from the airport every 30 minutes and reaches Piazza Politeama in about 45 minutes; you can also reach the railway station “Palermo centrale” by train. Buses are available for other destinations, from Agrigento to Enna.

The airport of Trapani Birgi “Vincenzo Florio” is the smallest one, but its importance has been constantly growing since when a very famous European low-cost airline started scheduling new flights connecting Western Sicily to various European cities. The number of passengers keeps growing: in 2010, it was the first airport in Italy for the increase of traffic. If you are planning to find a low-cost flight and you are flying to Trapani, Marsala, San Vito Lo Capo, Mazara del Vallo or other destinations in western Sicily then you should absolutely choose Trapani Birgi.
How to reach the city centre: buses and taxi stop right outside the arrivals area; from here, you’ll find buses going to Marsala, Palermo, Mazara del Vallo, Agrigento, Porto Empedocle, Sciacca, Ribera and more.

Last but not least, the airport that connects you with south-eastern Sicily: check our post to learn everything you need to know about the new Comiso Airport.

Pantelleria guide: how to experience the island at its best

When should you consider car rental in Sicily