Today we want to teach you how to cook one of the most savory recipes of Sicilian cuisine, named sardi a beccaficu, the Sicilian way to enjoy sardines.

This dish is one of the symbols of Sicily and it’s truly easy to prepare. You need sardines (800 g) to be cooked with some bay leafs, chili pepper and honey. Prepare a stuffing with bread crumbs (50 g), pine nuts (25 g), salt, raisin (25 g),  sugar (15 g) and just enough parsley, pepper and olive oil. Mix the ingredients and cook it for a few minutes on a pan. 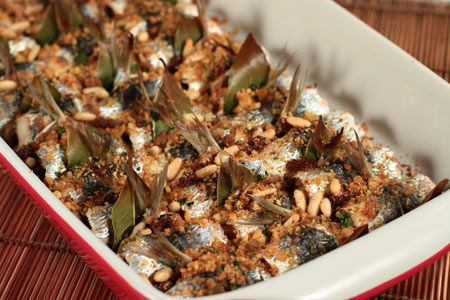 Cut off the head of the sardines, open and bone them. Then spread the stuffing on the sardine and roll them, make a wrap keeping the tail outside.

Put the wraps in a baking tray. Mix olive oil with a little bit of smashed chilli pepper in a bowl, then brush it on the sardines. Cook them in the oven for approximately 20 minutes.

Sarde a beccafico are a typical dish of Palermo and owe their name to a bird, u’ beccafico in Sicilian: Sicilian nobles used to hunt it and cook it with its own entrails, poor people tried to imitate that rich dish using the ingredients they could afford, sardines and bread.

Make you own Cuddura, the traditional sicilian Easter dessert