The sun keeps shining in Sicily, and temperatures get pretty high – especially during the end of July and the first days of August. So if you are visiting the island you can freshen up with a swim in the beautiful Mediterranean Sea, or chill out in shady corners of your Sicily villa… but there’s even more you can do. Sicilian cooking tradition is notoriously great… and it can help you even during the hottest days of the year!

SEE ALSO: 3 Sicilian beach-life habits you are not used to, but you’ll start to love

Sicily is a land where the sun shines almost 360 days a year, and the winds from Africa bring waves of heath that can get pretty intolerable: this is why Sicilians have learned from ages to protect themselves with plenty of different solutions – some of which are just fruits of nature and/or delicious recipes that will not only give you some relief but also delight your palate! So here you are: the top 5 Sicilian delicacies to refresh from the hottest days of the year! 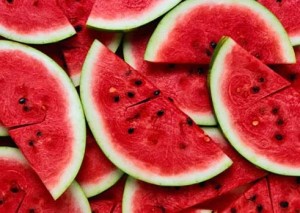 1. Watermelon
This is the summer fruit par excellence: juicy, rich in water, sweet and tasty. It’s made of 92% water and 8% sugar, so it contributes in refilling our body with the water we lose through sweat, and is also rich in B6 vitamin; recent researches have demonstrated that it also helps protecting our skin from all the risks of a long exposition to UV sunrays.
You’ll find plenty of watermelon (called anguria or melone) in Sicily, and you’ll have the chance to taste it in different ways – a slice, or a few chopped pieces inside a fruit salad, a “sorbetto” or inside the “gelo di melone” recipe that you’ll find at number two!

2. Gelo di melone
This cold delicacy is a very typical Sicilian dessert, that starts appearing on the refrigerator aisle of bars, cafés, restaurants, bakeries and so on as soon as the spring arrives: Gelo di melone is perfect for a refreshing and flavoursome break. It is prepared with plenty of whipped watermelon, sugar, corn starch, cinnamon and fondant chocolate flakes, all cooked together to obtain a thick mixture that is put in little bowls and garnished with chopped pistachios, powder chocolate and a few jasmin flowers, and then kept in the fridge for a few hours before being served. You really can’t miss this one!

3. Granita
Don’t make the mistake of thinking “oh, that’s just chopped ice with some syrup and sugar, not a big deal at all”: in Sicily, everything tastes different – and better! Granita is an important cooking tradition here, and we’ve been preserving it since the Arab domination of the island – back in the Nineth Century!
In Sicily, the true granita is traditionally served with the typical Sicilian “brioche”: our suggestion is to try this delicious combination. Best flavors: pistachio, lemon, mulberry and jasmine.

4. Gelato
Well, we couldn’t leave ice-cream out, don’t you think? Especially when we are talking about the region that probably invented it! Gelato is said to have been invented during the Arab domination of Sicily in the area of Acireale, and Sicilian ice cream is still nowadays one of the most delicious in the whole world. You’ll just have to choose the flavors that inspire you most, and your choice will be really wide: from the classics (chocolate, strawberry, lemon, cream) to the most original (setteveli flavor in Palermo, jasmine, carrot), to be tasted on a cup, on a cone or – again – in a typical Sicilian brioche. Not only will gelato be the best solution for a refreshing break: a “brioche con gelato” in Sicily is actually a proper lunch!

5. Frozen prickly pears
This is a very traditional popular recipe that you’ll find especially in Western Sicily – typically in Palermo. Prickly pears are very common in Sicily: you’ll be able to see many of these plants almost everywhere, from gardens to the sides of motorways. These fruits have plenty of healthy properties: they are rich in water, vitamines, sugars and mineral substances. As you walk through the sun-drenched streets of the historic centre of the city or town you are visiting, you may find little carts selling frozen prickly pears: just try a couple of them, and the refreshment will be really relieving!

What about your experience? How did you escape from the hottest summer days in Sicily? Tell us! And remember: if you are coming to Sicily in June, July or August, always take a hat and suntan cream with you!

5 top Sicilian souvenirs you should take home from your holiday

Top five things to do in Sicily in December