Once again, we’re here to tell you that Sicily is a perfect destination for fall-break holidays: the atmosphere is more intimate and romantic, temperatures are still very pleasant (24°C and a limpid blue sky right now in Palermo!) and even the most touristic sights are less crowded and therefore more enjoyable. This time, we decided to give you a hint of what you’re missing by choosing 7 top destinations that can even be enhanced and embellished by the autumnal atmosphere. 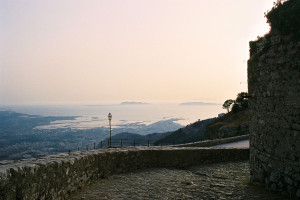 A view of Trapani from the Erice castle – photo by Bernhard J. Scheuvens

– Erice: this timeless Medieval hamlet, located on top of a mountain overlooking the whole Western coastline of Sicily, is really perfect in Autumn. Fresh air and a misty atmosphere make you feel like you’re being taken back to the Middle Ages, as you walk through narrow streets of cobblestone, and you can’t see the top of the beautiful Norman Castle because of the fog. Temperatures are slightly lower here compared to the countryside, but the bright side is that you can always warm up with delicious “genovese alla crema” pastry, ceaselessly taken out of the ovens in every local bakery, and hot cocoa!

– Mount Etna: Autumn is a really good time to visit the biggest active volcano in Europe. It’s the period of grape harvest, and wines of Etna are worldwide known for their refined flavors; moreover, the whole territory is particularly prosperous, thanks to the peculiar characteristic of the soil of the volcano. This is why October and November are the months of food and wine fairs par excellence: Etna mushrooms, honey, chestnuts, wines, apples… this is definitely the best destination if you’re looking for a gourmet experience. And then, who knows? If you’re lucky enough, you’ll have the chance to see the first snow of the season! 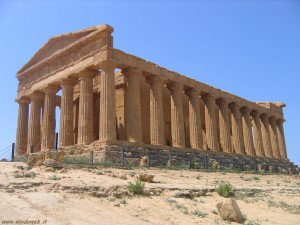 The Temple of Concordia at the Valley of the Temples in Agrigento.

– The Valley of the Temples in Agrigento: together with Taormina, Palermo and Syracuse this is probably the most famous touristic destination in Sicily. Visitors come and visit all year round, but in summer high temperatures and the absence of shady corners in the site can make the visit utterly exhausting, whereas autumn here is very agreeable and not rainy. The best conditions to take all the time you need tofully appreciate the greatness of this UNESCO World Heritage Site indeed! Did you know that the monumental area includes ten Doric temples, three sanctuaries, plenty of necropolis as well as fortresses and a pyramid-shaped Greek tomb?

– Modica: if it’s a more sophisticated, yet very authentic atmosphere you’re looking for, we recommend you visit this charming baroque city located in the province of Ragusa. Its historic centre, together with other centres of the Noto valley, is a UNESCO World Heritage site, thanks to its refined baroque churches and palaces. A stroll along the narrow ancient streets of the city will be perfect in Autumn: after visiting its most beautiful monuments, such as the fascinating San Giorgio Dome with its towering façade, you can warm up sipping a cup of delicious local hot cocoa. The chocolate of Modica is still produced following an ancient Aztech recipe: its unique, flavoursome taste will definitely enchant you. 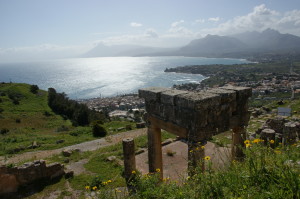 – Solunto: this ancient Hellenic city was founded on mt. Catalfano, a few kilometers far from Palermo, during the 4th Century BC. Nowadays, excavations have brought plenty of interesting remains of the ancient city back to light: during your excursion, you’ll be able to walk down the ancient roads of the town, as well as to observe the remains of two Roman temples and the mosaic pavements of an old house set on the very top of the mountain. And of course, the panorama is absolutely jaw-dropping: if you come by in a very limpid day, your sight may reach the medieval hamlet of Cefalù.

– Ragusa Ibla: the district of “Ibla” is the centre of the city of Ragusa, the site where it was initially founded. Together with other towns of the Noto valley, this is a UNESCO World Heritage site: its streets are studded with charming baroque monuments, churches and palaces, all built during the restoration of the city after the devastating earthquake that occurred in 1693. From lovely little streets surrounded by old houses with typical wrought-iron balconies to elegant squares, from the beautiful St. George Dome to the verdant gardens, the city is filled with a very peculiar, old-fashioned atmosphere; the panorama is really charming, as Ibla is surrounded by the lush valleys and hills of the Hyblaean mountains.

– Castelbuono: this pretty hamlet is set on the slopes of mt. Milocca, part of the Madonie mountains, in the countryside of Palermo. Its history is really ancient, dating back to the Neolithic era; however, it’s the Arab and the Norman dominations that have left the most evident marks. The “Ventimiglia” castle is the main feature of the town indeed: its cubical shape was clearly influenced by the typical Arab architecture, whereas its squared angular towers are typical of the Norman castles. The palatine chapel of the castle contains amazing plasters by Giacomo Serpotta, a famous local artist. In Autumn, this town often hosts local wine and food fairs: a great chance to combine the discovery of such an interesting site with a taste of local delicacies!