With its 3343-meters height, Mount Etna is the tallest active volcano in Europe: a majestic, impressive giant that fascinates visitors from all over the world, as well as the locals. Its soil is very fertile: wines, oranges, honey, mushrooms and plenty of other typical products growing on its territory are famous for their genuineness and flavoursome taste.

Moreover, the whole Park of Etna is well renowned for its wonderful landscape. Verdant slopes, pretty orchards and vineyards, lava flows… and tiny picturesque towns, peacefully perched on the flanks of the volcano, surrounded by forests and mountains, where the air is clean and fresh and the atmosphere is bucolic, quiet and carefree. All these pretty towns deserve a visit, and the best way to discover them all – together with the wonders of the Park of Etna – is by taking the Circumetnea railway. 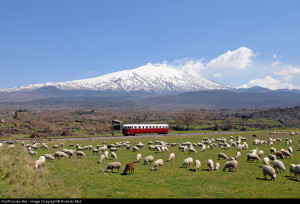 The “ferrovia Circumetnea” connects the city of Catania, at the feet of mt. Etna, to Riposto by almost encircling the whole volcano and stopping in plenty of the pretty towns of the Park of Etna. Here are the ones we believe you really shouldn’t miss:

– Paternò. This lovely town, 225 meters above sea level, is famous for its ancient history and interesting monuments – such as the Norman castle: the panoramic view from the roof terrace is really one of a kind, from the Etna to the area of Catania and the Simeto river.

– Adrano. Located at about 600 meters above sea level, Adrano is one of the biggest towns in the Park of Etna. Its history is ancient and fascinating: evidence of human presence from the Neolithic era has been found in the area, and “Adranon” played a key strategic role as an ancient Greek colony. The town is one of the biggest producers of the delicious “Tarocco” red orange, together with grapes, pistachios and olive oil. 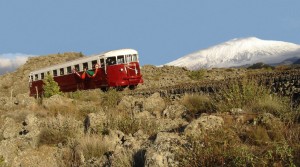 The picturesque red train of the Circumetnea railway, with snowy Etna in the background. Image from circumetnea.it

– Bronte. It’s the capital of pistachios, the green gold of Sicily: this ancient town is a worldwide famous destination thanks to the deliciousness of its pistachios. The annual Pistachio Festival attracts thousands of visitors every year: people come from the whole Mediterranean area and beyond to discover all the possible recipes that can be realized with this flavoursome ingredient.

– Randazzo. 765 meters above sea level, surrounded by verdant hills and mountains and – of course – the majestic Mount Etna. There is plenty to see, from the Royal Palace to the Archaeologic Museum, together with the famous “grotta del gelo” (cold cave) originated from the freezing of an ancient lava flow.

The pretty hamlet of Castiglione di Sicilia – image from parks.it

– Castiglione di Sicilia. This lovely hamlet (one of the most beautiful in Italy) is located 621 meters above sea level, and is really worth a visit for the breath-taking panorama, as well as for the pleasure of taking a relaxing stroll among the peaceful little streets of the village. Don’t miss a visit to the Castle of Ruggero di Lauria, which played an important role during the Vespri Siciliani revolution.

– Linguaglossa. This little village rises at about 500 meters above sea level, and it’s one of the most famous destinations in Winter: the Mareneve street, starting from its centre, will take you to Piano Provenzana, the well-known skiing area located at 1800 meters above sea level. If you love winter sports, you can’t miss it!

– Riposto. This tiny seafaring town is one of the most picturesque destinations of the Ionic coast of Sicily, between Catania and Messina. Its port is also called “the port of Etna“, and its seaside promenade is really lovely, perfect for a relaxing stroll in the afternoon after a binge of seafood delicacies offered at the typical picturesque restaurants nearby.

Winter holidays in Sicily: looking at the sea while skiing on a volcano

Pistachio Festival 2013 in Bronte: celebrating the green gold of Sicily