If you could have visited Sicily back when the ancient Greek culture extended its dominion over the Aegean and and the Southern Mediterranean, you would have seen a prosperous land, the very heart of Magna Graecia and of its culture. Today the impressive doric style temples and the wide greek amphitheatres stand to witness the ancient glorious past of the island. Walking through these places will make you feel as you’re making a dive into history and will make you see the roots from which Sicilian culture has evolved in time. Today we want to introduce you a quick guide through these fascinating itineraries, starting from the Southwest of the island.

If you’re spending your holiday in one of our villas with pool near Selinunte, you’ll be right at the perfect starting point for your tour. Selinunte hosts indeed the largest Archeological Park in the whole Europe, even larger than the one in Athens! The Acropolis of Selinunte, built by the Greeks of Megara in the seventh century BC exploiting the nearby Quarries of Cusa, is a Greek metropolis rising in the heart of the archaeological park right before the bluest of seas. Among the numerous remains of the city, you will have the chance to visit the huge Temple G, dedicated to Apollo, which covers an area of about 6000 sqm, the Malophoros sanctuary, named after its little statues of women carrying pomegranates, and the ruins of the necropolis that can be found both near and far from the Acropolis.

SEE ALSO: Why Google has chosen Selinunte for its exclusive party

Let’s go on with our tour, proceeding Eastward and stopping by another important landmark of the Greek presence in Sicily: the ancient theatre of Heraclea Minoa, built by the same Greek colonists who built Selinunte. The view on the sea from the theater is amazing and we’re sure you’ love to go for a walk down to the beach and a stroll in the pine woods around. 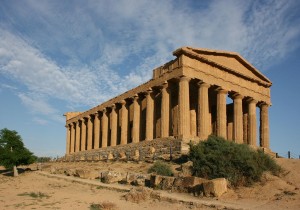 The Temple of Concordia in the Valley of the Temples, Agrigento

Going on, following the footprints of the ancient Greeks in Sicily, we get to the last destination of our little tour in history: Agrigento, with its stunning Valley of Temples, described by the Greek poet Pindar as “the most beautiful of the mortal cities”. Included in the list of UNESCO Heritage Sites, this unique site is characterized by the remains of ten Doric temples, three shrines and a high concentration of funerary buildings, among them the so-called Tomb of Theron, a large pyramid-shaped monument made of tuff. But be warned: temperature here can get really warm, especially in summer, so bring along plenty of water and a hat; remember to wear your most comfortable shoes, you’ll be literally hiking across the valley to get to its most beautiful spots. Your efforts though will be adequately rewarded.

The golden yellow temples, built in 5 century BC, rise on a ridge facing the sea, which makes  the landscape created by the monumental ruins even more beautiful and suggestive. The best preserved temple is for sure the impressive Temple of Concordia (Temple of Harmony), which has been named after an inscription that once stood nearby. But the biggest temple in the valley is the Temple of Olympian Zeus, which has nearly the dimensions of a soccer field! Between its columns once stood the Telamones, gigantic statues of Atlantes 7,60 m high. The only preserved Telamone is today kept in the Archaeological Museum of Agrigento. This is another essential stop if you want to complete your classic tour, so don’t forget to pay a visit to it!

For more informations on the archaelogical site of Sicily and on the most interesting spots on the island, take a look at our Sicily Travel Guide!

Why Google has chosen Selinunte for its exclusive party

Google comes back to Sicily for its annual party, for the 2nd time in a row