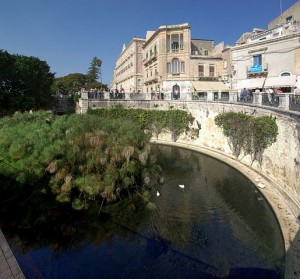 Sicily is a land of myths and legends, a place where often truth and mystery come together and nothing is as it seems. Today we want to tell you a story about the city of Syracuse and one of its fountains, precisely the Arethuse, on the island of Ortigia.

This fountain has always been an inspiration for artists and poets, for instance its name is quoted by John Milton’s Lycidas, as well as Alexander Pope’s The Dunciad, and William Wordsworth’s The Prelude, but why is it so famous?

This source of fresh water is coming from underground streets of one of the oldest Sicilian cities, then gets to the sea and brings with it the echo of an extraordinary story.

One day the god Alpheus fell in love with the young nymph Arethusa while she was bathing naked. She was the daughter of Nereus and Doris, and escaped the God to find shelter on the island of Ortigia, where she asked for help to the goddess Artemis who turned her into a water source.

Zeus, moved by the pain of Alpheus turned him into a river, so that he could run under the waters of the Aegean Sea and rejoin his lover mixing its waters with those of the source of fresh water.

Alpheus is indeed the name of a small river in Greece that after a short tract disappears underground. According to the legend its waters would be the same of the spring of Arethusa in Sicily.

Testa di moro: the legend of an ancient art