Together with the Misteri procession in Trapani, the Holy Week in Enna and Caltanissetta, the celebrations of Santa Rosalia in Palermo and of Sant’Agata in Catania, Saint Lucy’s commemorative events in Syracuse are the most heart-felt religious celebrations in Sicily, as well as the most famous worldwide. Delegations come from all over the world, especially from Argentina and the United States, to take part in this sumptuous event. If you are staying in one of our Syracuse villas, don’t miss this chance to get to know the authentic religious spirit of Sicily, and to attend such an extraordinary celebration.

The statue of Saint Lucy in Saint Lucy’s day in Syracuse, photo by Salvo Cannizzaro from panoramio.com

Saint Lucy’s day is on December 13th, but the preparation starts at least one day before, when in the morning the silver statue of the Saint is placed upon the main altar of the beautiful Cathedral of Syracuse, and the typical “cuccìa”, the traditional food of Saint Lucy’s day, starts being cooked in almost every kitchen; at night, the solemn vespers are celebrated in the Cathedral and the cuccìa is served to the people.

See also: What to see in Syracuse – Our top 5

The day of December 13th is all about the virgin and martyr Saint Lucy, who was born in Syracuse and is said to have prevented Sicily from being ravaged by famine by sending a dove to announce the arrival of an entire ship loaded with wheat: this is why pasta, bread and other derived products are banned from every table in every house of the island today. Instead, the typical “cuccia” is served – the most traditional one is said to be just what the starving islanders ate as soon as the ship arrived: boiled wheat with a shred of oil, later enriched with vegetables. A more modern and tasteful version is also widely spread: the sweet cuccìa, made either with sweet ricotta cheese, chocolate sprinkles, candied fruit and orange peel or with chocolate mousse or heavy cream. 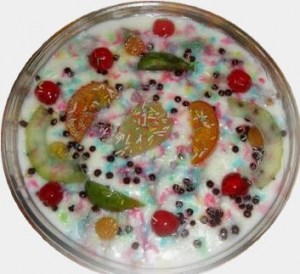 Together with enjoying these typical delights, we recommend you follow the whole celebration, which is very striking and touching: at 3:30pm the silver statue of Saint Lucy is taken out of the Cathedral and greeted by the bells ringing and a fully-crowded Piazza Duomo, and then carried by 60 “green berets” (as the carriers are called) through the Aretusa street. One of the most moving moments is the passage of the statue from “Porta Marina”, close to the port: here, the Saint is saluted by soldiers and sailors’ boats; then after crossing the bridge and reaching the mainland, the procession walks through Corso Umberto and then Viale Regina Margherita, enters the suburb of Santa Lucia and then reaches the basil of Santa Lucia al Sepolcro, where it will be displayed on the main altar for seven days. The celebration ends on December 20th, when the statue is taken back to the Cathedral, saluted by  beautiful fireworks. 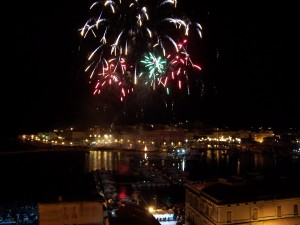 The most important celebration, of course, takes place in Syracuse, but the whole island participates to this memorial day: on December 13th plenty of major cities and towns of Sicily house celebrations and events. Alongside the traditional “cuccìa”, since pasta and similars are not served today, usually bakeries and “panifici” are closed, especially in Palermo, in order to leave room for local “friggitorie” to serve the most delicious “arancine”, definitely the meal of the day together with sweet cuccìa. Actually, this being the day of arancine, local cooks like to give vent to their creativity to come up with the most inventive and flavoursome variations of the common rice meatballs: all over the city you’ll find chocolate-stuffed arancine, as well as other filled with pistachio cream, fish and much more… this is Sicily after all, and what’s a religious celebration in Sicily if it doesn’t have its own traditional delicacy?

If you’ve tasted a few mouth-drying arancine during your stay and are already missing their exquisite taste, check our Ultimate guide to cooking perfectly-Sicilian arancine!