If you are coming to Sicily, you are probably already aware of the deliciousness of local cuisine. Tradition is one of the most important values for Sicilian people, who love cooking following their ancestors’ recipes, combining different food from different culture: the result is simply one of the most appreciated cuisine in the world. But Sicilian cuisine doesn’t involve only classic appetizers (such as eggplant caponata), pasta (with sardines, for example), fish courses (swordfish, red tuna and so on) or desserts (cannoli and cassata, just to name the most famous ones): don’t forget to taste Sicilian street food as well!

See also: Our ultimate guide to cooking perfectly-Sicilian arancine and How to cook perfect “panelle siciliane”

Sicilian people just love street food. It’s a very important tradition in the island, and the capital of this tradition is Palermo indeed – the city has recently been listed among the three world street-food capital cities! Here, locals eat street food for a quick lunch break, or during the afternoon, but also for breakfast; youngsters love having arancine or panelle at late night, maybe right after leaving a night club.

So if you are staying in one of our Sicily villas and you are wondering which street food you really should try during your stay, here is our top five to give you a hint!

1 – Arancine: We already told you about these delicious rice balls in our article about the 5 Sicilian delicacies you absolutely can’t miss, therefore we couldn’t avoid awarding them with the number 1 position. Just taste them: you’ll understand.

Bread with panelle in Palermo, photo credits: Dedda71 on wikipedia

2 – Panelle & Crocchè: these two usually go together inside a “Mafalda” panino, with sesame seeds on top. Panelle are little square slices of chickpeas flour fried with water, salt and parsley. Simple as that… But the taste is just stunning! Especially if combined with Crocchè: mashed potatoes and egg are mixed together, covered with breadcrumbs and then – of course – fried. Some like to squeeze a slice of lemon on the panino with Panelle and Crocchè… Others believe that lemon corrupts the genuine taste of this food. We’ll let you decide by yourself on this one!

3 – Pane ca’ meusa: don’t start sneering. We know that spleen is not a common dish, but believe us: panino with spleen is a real must in Sicily – especially in Palermo. You’ll find plenty of stands offering you pani ca’ meusa at really low prices almost everywhere in the city centre, especially in Vucciria, Ballarò or Capo markets: our advice is to think outside the box and just go for it. We are sure you won’t regret it.

4 – Sfincione: this is very typical of the city of Palermo, but you’ll be able to find it in other Sicilian destinations as well. The recipe of Sfincione is very ancient, and comes from Arab tradition – its main ingredient is pizza dough, while the seasoning includes tomato sauce, onion, anchovies, oregano and Sicilian caciocavallo cheese. For its ingredients and its very local character, it is also called Pizza Palermitana. 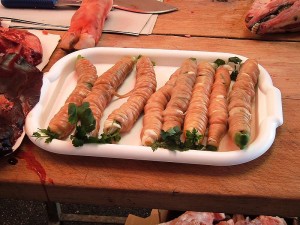 Stigghiola at the market of Catania

5 – Stigghiola: ok, things are getting serious here. Enough with rice, fried stuff and bread: Stigghiola is hardcore street food. Its main ingredient? Lamb guts. “Stigghiularu” (people with little stands along the street selling stigghiola) wash it with water and salt, stuffed with parsley and onion, rolled in a leek and cooked on a spit. If you decide to taste this very particular street food, put some salt and a few drops of lemon on top.

And now, of course, we want to hear from you: if you have been to Sicily, what was your favourite street food? Which one didn’t you like? And if you still haven’t been here, which one are you looking forward to tasting?