Sicilian “pupi” are pretty, delicately-crafted puppets that have been playing an important role in bequeathing the culture and the history of Sicily through time. So important that UNESCO decided to officially recognise the importance of this ancient and well-loved tradition by declaring it “Masterpiece of the Oral and Intangible Heritage of Humanity“. 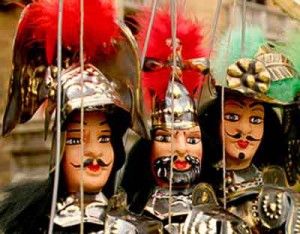 The plaque was delivered a few days ago to Mimmo Cuticchio, a well-known storyteller in Palermo, member of one of the most renowned and representative families of “pupari” in the whole island. A plaque by UNESCO was also delivered to Janne Vibaek, the president of the International Puppets Museum located in Palermo. The museum is actually one of the most interesting cultural spots in the city: if you are staying in our villas in the area, we highly recommend a visit to this wide and impressive collection. A one-of-a-kind exhibit displaying a collection of puppets, figureheads and “pupi” from all over the world, patiently gathered by the philantrophist Antonio Pasqualino. After he passed away, his wife, the Danish-Sicilian Janne Vibaek, took charge of the Museum. 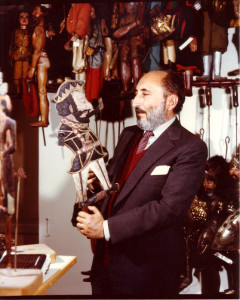 Antonio Pasqualino with his “pupi”. Image from reportagesicilia.blogspot.it

You’ll find that they are not just well-crafted toys for kids entertainment: watching an “opera dei pupi” show is an amazing figurative trip through the most interesting and peculiar traditions and history of Sicily. And even though this kind of performance appeared in the island around the Nineteenth Century, it can still be considered incredibly relevant today.

Once again, an invaluable achievement testifying the endless, inestimable culture that pervades the whole island of Sicily. And we are happy to share it with you as much as we can.