It’s the tallest active volcano in Europe (3343 meters above sea level), a majestic giant overlooking the city of Catania, also called “black city” for its buildings permeated by soot and ashes, a stunning touristic destination with delightful quiet towns and skiing stations, and its ground is so fertile that some of the most delicious Sicilian wines, honey varieties and mushrooms grow on its slopes. And from June 21st, it is also a UNESCO World Heritage. 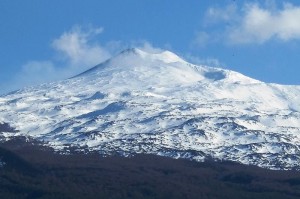 Etna volcano from the countryside of Randazzo, photo by Pequod 76 on wikipedia

We are talking about Mount Etna, of course: one of the most famous symbols of the island of Sicily. Almost a week ago, this beautiful giant has been declared UNESCO World Heritage during the 27th session of the World Heritage Committee, whose members met in Phnom Penh, with this motivation: “its celebrity, scientific importance and cultural and pedagogical values are important worldwide”. The UNESCO Committee also stated that the most important active volcano in Europe has a documented activity of 2.700 years, one of the longest in the world; moreover, “The craters on the top, the cinder cones, the lava caves and the Bove valley depression make Etna a privileged destination for research and education”, as the volcano “keeps influencing volcanology, geophysics and other Earth-related sciences”.

See also: The Circumetnea Railway, the best way to discover the Etna park and Winter holidays in Sicily: looking at the sea while skiing on a volcano

We couldn’t be happier about this award. Etna is a really magical place: from when you see it appearing in the distance, maybe from the motorway connecting Palermo to Catania, until when you are in Linguaglossa, Nicolosi or other towns of the Etna park, and you visit its craters on top, you can feel a very enchanting, unique atmosphere that can be perceived only in this very corner of the world. In winter, the top is covered with snow and the giant becomes a popular skiing destination: people come from far away to experience the emotion of skiing on the slopes of an active volcano. And then wines, olive oil, honey, mushrooms: typical products of the Etna Park are really delicious, and their flavor is particularly unique for the characteristics of the ground.

If you have already been to our Catania villas, then you most certainly know what we are talking about. The landscape of this area is really stunning: Catania lies between the giant Etna and the blue Ionian sea, and the volcano can be seen also from the ancient theatre of Taormina – an idyllic scenario with one of the most beautiful hamlets in Sicily, the beach of Giardini Naxos and the charming sea of the little gulf. And then you just raise your head and there it is: the new UNESCO World Heritage.

Circumetnea railway: the best way to discover the Etna park

Winter holidays in Sicily: looking at the sea while skiing on a volcano