This may sound somewhat macabre to you – well, it actually is – but one of the most interesting and unusual sites of Palermo involves the sight of about 8000 mummies buried underground from the late 16th Century to mid 19th Century: the Capuchin Catacombs of Palermo (Catacombe dei Cappuccini), an unconventional but still remarkable tourist attraction of the city. 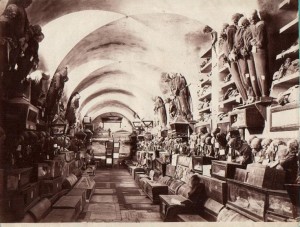 The Capuchin Catacombs of Palermo.

However unusual, the Catacombs are really worth visiting especially for their outstanding historical value as they provide an extraordinary evidence of the city’s traditions and customs of the old times. In fact, when the cemetery of the Capuchin Monastery outgrew its capacity, a decision was made in 1599 to excavate new crypts below the cemetery and bury only dead friars; however, as the embalming process was quite expensive, being entombed in the crypts became a sort of a status symbol over the following centuries and a large number of wealthy people decided that that was the place where they wanted to rest in peace.

Laid down or sit, mummies are still nowadays dressed with the most exclusive and fashionable clothes of their time (priests wore traditional clerical robes): the bourgeois, the aristocrat, the surgeon, and even young ladies who died before their marriage (often interred with their wedding dress) and children can be found in the dark dungeons. This practice was declared unhygienic in mid 19th Century; the most famous mummy of the Catacombs, however, was the very last one to be buried in 1920 – a two-year-old child, Rosalia Lombardo, whose body is still remarkably well preserved.

Don’t be scared though! More than a thrilling experience, a visit to this site will let you delve into the most peculiar local customs of the last centuries; moreover, you’ll have the chance to learn some interesting odd facts about the Catacombs. One for all – the crypts were maintained by the relatives of the mummies: they would provide the Capuchins with money donations in order to keep the Catacombs open and used to pay regular visits to their dearly departed and to keep their body in proper conditions. Should a family stop sending money, the mummy of their relative would be removed from its location and put on a shelf until they recovered the payment…

The site is just a few minutes’ walk away of the Norman Castle of Palermo: you can visit from Monday to Sunday, from 9am to 12:30pm and from 3pm to 5:30pm. And if you’re a little bit shocked after the visit, don’t miss the Capuchin Convent and the Church of Santa Maria della Pace nearby, and then hit the Norman Castle – we are sure that the marvelous mosaics of the Palatine Chapel will be the best way to recover… well, that or a taste of delicious gelato in Piazza Indipendenza!