Sicily is famous all over the world for its food and its beautiful beaches. These are the two main reasons tourist come to visit the island, especially in summer. Once they get there though they discover a charming world made of thousands-years-old traditions, majestic archaeological sites… They discover a land shaped by history and by the many populations who extended their dominion on the island.

At the beginning of the 11th century Sicily was ruled by Saracens, but soon it would’ve passed under the dominion of the Normans. When Count Ruggero came to Sicily to help his father, King Tancredi, win the war against the Saracens, he brought a standard given to him by the Pope himself. The standard represented Virgin Mary and baby Jesus and it was brought by Ruggero to the town of Piazza Armerina to be venerated in its cathedral.

SEE ALSO: This August discover the flavours of Sicily in Avola

This little piece of Sicilian history introduces us to one of the most folkloristic events taking place in Sicily in August. The story of Count Ruggero and of the standard –  to this day still on exhibit in Piazza Armerina’s cathedral – is the subject of a country fest that will be held in the town from 12 to 14 August, and that you will be able to join booking one of our budget villas in Sicily. 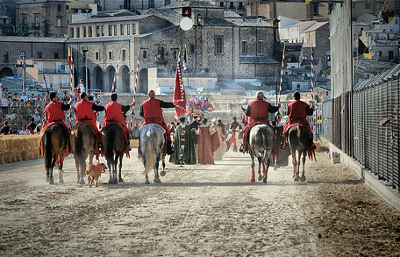 If you visit this fascinating medieval hamlet during those days you’ll have the chance to attend the historic reenactment of the liberation of Piazza Armerina and of the delivery of the standard. During the fest four teams coming from the four district of the town will challenge one another in a medieval style tournament. At night then comes the time for food and wine, with the most typical dishes of the Sicilian cuisine and the tasty local wines offered to dames and sirs.

Palio dei Normanni, this is the name of the fest, is just an opportunity to visit one of the most beautiful towns in Sicily, a stop you cannot miss during your trip. Visit “Villa Romana del Casale”, an ancient and well preserved Roman villa surrounded by eucalyptus woods, and part of UNESCO World Heritage Site: its mosaics have become famous all over the world.

For further suggestions on the area take a look at our Sicily Travel Guide!

This August discover the flavours of Sicily in Avola

Prickly Pear Fest in the town of The Leopard