Carnival is one of the most appreciated celebrations in Sicily: in fact, the island houses some of the most outstanding carnivals in Italy. We already told you about the Carnival in Acireale, the most famous one, but the ones in Sciacca and Termini Imerese are quite appreciated and noteworthy in Sicily and beyond, thanks to their ancient origins and the extraordinary craftmanship of the creators of the carnival floats.
However, even smaller towns all over the island look forward to celebrating carnival: so if you happen to be in Sicily towards the end of February, you’ll surely have the chance to attend this colourful and lively event – no matter where you’re staying. Here is a list of the towns celebrating Carnival in Sicily, with dates and highlights. 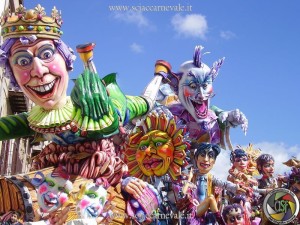 A carnival float in Sciacca – image via sciaccarnevale.it

– First of all, the Carnival of Sciacca (one of the most famous of the island, as we said): on February 27th, the Major will hand the city keys to Peppe Nappa, the Carnival king, and a week of masks, fun, pranks and astonishing parades will start. It’s the 112th official edition of this event that grounds its roots in the Middle Ages, and the beauty of the finely-crafted carnival floats is legendary. If you’re staying in one of our Sciacca villa rentals, you can’t miss it!

– If you’re spending your holiday in the area of Trapani, there are some picturesque carnivals we definitely recommend: first of all the “Carnevale Egadino” that takes place on the wonderful island of Favignana – a chance to discover the beauties of this enchanting destination when it’s less crowded with tourists. Parades and masked balls are on schedule from Feb 27th to March 4th, not only in Favignana but also in the two minor islands of the Egadi archipelago – Levanzo and Marettimo. Tasting sessions of local desserts and sweets are in program as well!
Moreover, a funny and interesting Carnival will be set in Valderice, just 5 minutes away from Trapani, halfway from the lovely hamlet of Erice – one of the most representative events of local folklore; on the other hand the Carnevale di Petrosino (near Mazara del Vallo), will be perfect for a seaside-based carnival with plenty of entertainment and music.

– Other noteworthy celebrations can be found in the area of Palermo – both on the seaside as well as in the countryside. The Carnival of Balestrate, a seaside resort best famous for its kilometer-long golden sandy beach, is particularly interesting for its “Ballo dei Pastori” (Shepherds’ ball) tradition that requires men to perform a folk dance wearing women clothes; if you’re looking for a chance to discover the inland of the province of Palermo, then hit Corleone from Feb 27th to March 4th and get acquainted with “Riavulicchi”, the typical masks of the local Carnival. 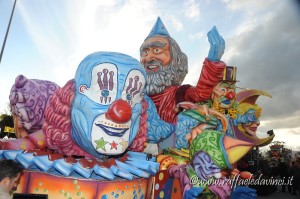 – Staying in south-eastern Sicily? No problem: plenty of events are available there too! From March 2nd to 4th you’ll have the chance to combine the pleasure of visiting an ancient historical town with the fun of Carnival and the tastefulness of local delicacies: head to Chiaramonte Gulfi, in the province of Ragusa, and you won’t be disappointed. If you prefer the south-eastern coast (province of Syracuse), choose the 53rd edition of the Carnival of Avola, from February 27th to March 4th: allegorical carnival floats, some made of papier-maché and other surprisingly and beautifully covered with flowers, folk groups and dancers, entertainment and typical local delicacies like maccheroni pasta with ricotta cheese and tomato sauce.
The UNESCO World Heritage site of Palazzolo Acreide also houses a lovely Carnival: alongside float parades, you’ll have the chance to taste some of the most typical recipes of the area and – of course – to visit one of the most fascinating sites of the island!

Acireale Carnival 2014: ready to be amazed?