More than All Saints’ Day, All Souls’ Day is a cherished celebration in Sicily, deeply rooted among the traditions of a variety of cities and towns of the island. The celebrations to commemorate the deads on November 2 date back to the 10th century around here.

According to the local folklore, during the night between November 1 and 2, the deceased loved ones come back to their homes to bring gifts to children. On these days most of Sicilian towns are adorned by colourful markets, selling mostly toys and sweets, along with Autumnal delicacies such as roasted chestnuts.

Among the stands of the temporary markets you’ll find sweets prepared specifically for the celebrations: typical cookies such as Crozzi ‘i mottu (bones of the dead), or Pupatelli, cookies stuffed with toasted almonds, Nucatoli e Totò (the whites and the blacks), the first veiled sugar, the latter of cocoa powder, or the Taralli, shortcut pastry donuts covered in icing sugar. 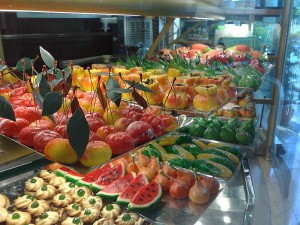 But the list is almost neverending. Don’t miss the Frutta Martorana, traditional marzipan sweets, in the form of fruits and vegetables! The most folkloristic sweet is surely the Pupo di Zucchero, a little statue made of just sugar, usually depicting Christian paladins and Saracens, the pupi of the Sicilian puppets theatre tradition.

All these sweets are used to fill u’ Cannistru, a basket filled with seasonal fruits, dried fruit, confectionery and a variety of sweets among the ones just described.

Every town in Sicily has its own traditional temporary markets, suggestively and grimly called “Fairs of the dead”, held on the days between October 31 and November 2, but we want to suggest just a couple of them: the one that will be held at Villa Filippina in Palermo, opened from 10 AM to 8 PM; the market in Syracuse, housed in a large area of the old town between Piazza delle Poste, Piazza Pancali, via Riva delle Poste, and Via Trento; and the one in San Pietro Clarenza, in the province of Catania, featuring a rich gastronomic area and a large space dedicated to live shows and Sicilian puppets theatre.

This August discover the flavours of Sicily in Avola